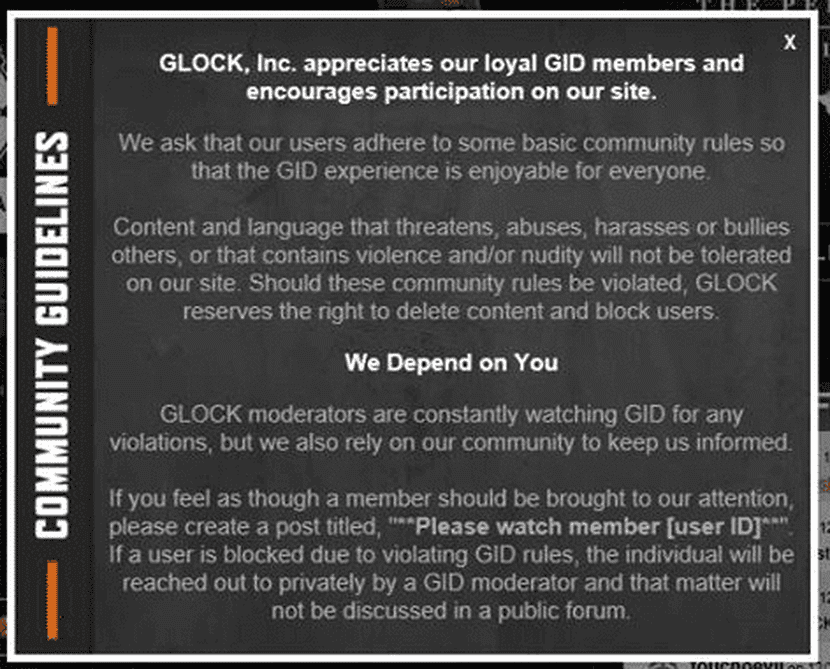 Directly from GLOCK:  Whining is NOT an approve topic

http://id.glock.com/answer/question/view/id/218654
Here are some of the things that have been discovered to be smiled upon or frowned upon by Glock.  Keep in mind this is just the advice gathered from the members that have had direct interaction with Glock at conventions, in email, over the phone, or on GID.  Some were even given the wonderful Medax Patch (see Patch List).  Not saying anyone has to follow any of this.  Everyone is more the welcome to learn things the hard way on their own.   This is just being passed on to help all the new members get upto speed with the way things are done in the GID community.  Take it or leave it.

1- Upvoting.  You can upvote as much as you want to.  Upvote everyone in every question if you would like to.  The more upvoting the better.
2- Using the search feature before posting a ?
3- Being friendly and respectful
4- Replying to your own ?'s
5- Interacting with those that answer your ?
6- Upvoting those that answer your ?'s
7- Posting cool pics to the live feed (though please keep it classy)
8- Joining in the community
9- Asking ?'s
10- Helping others
11- Posting things in the live feed.  those posts though should only consist of Guns, Team Glock, Clothed women with guns, gun show pics, pro shooters (clothed), shooting competitions, GLOCK related items, Shooting related pics, and other on topic related pics
12 - 1 Off Topic post per day (maximum) per member

1- Flooding the board with several ?'s in a row (spread them out.. preferably like 2 an hr or so)
2- Gaming (definition below) the system for points
3- Putting a "+1" or any other single work reply in every answer to a question.  This is referring to when you post a reply to every answer to a question with nothing more then a "+1"  or something similar in the response and has nothing to do with upvoting .  If you are going to reply to every answer at least be original and do not make it look like you are doing it for nothing more then the extra points.
4- Never asking a ? that is gun related
5- Downvoting
6- Upvote parties
7- Begging for upvotes
8- Posts about how many points you have left till you rank up
9- Good morning posts
10- Good night posts
11- Repeated posts on the same topic (use the search feature)
12- Don't be a troll (definition below)
13- Asking more the 10 ?'s a day (unless they are really original)
14- Posting that are just whining
15- Posting things in the live feed other then Guns, Team Glock, Clothed women with guns, gun show pics, pro shooters (clothed).
16- Posting nude or mostly pics in the live feed
17- Posting anything in the live feed not listed as a good thing to post
18- Continually posting about things like a poll, training, or other things not being added to GID as fast as you would like them to be, or anything else
19 - Over posting things as milestones when they really are not ( read the how to post on milestones)
20 - Countdown posts (be it time till something, points till something, upvotes till something, etc..)
21 - Complaint posts
What is a Milestone and what should I post as one.


Here is the line about it directly from the guidelines put forth by GLOCK:
“GID Achievements- Reaching a new level, getting a patch, been a member for a year (these are things to be celebrated)” http://id.glock.com/answer/question/view/id/119534

As we all know milestones or achievements are an approved topic per the guidelines that GLOCK has put forth for everyone to follow. Lately though it seems as though some people are taking advantage of that to over post things that really are not true milestones. Keep in mind that every time people have abused something on GID that GLOCK has come back in and changed things so that it could no longer be abused (note all the point reductions and other limits that have been put in place since the site started). I propose that before GLOCK has to step in again and crack down further on the site that we put a stop to it first. Here is what I recommend that is fair still allows for achievements/ milestones to be posted yet will eliminate the over posting issue and will prevent GLOCK from having to step in again and limit things down more as they have done in the past.

Milestones/achievements that should NOT be posted:
- About to rank up
- Countdown till I rank up
- Almost have X amount upvotes
- If I get x more upvotes I will have x upvotes
- Posting every 500 or 100 upvotes
- Points totals. (with the exception of the rounds in the level 24 mag) This is pretty much just a rehash of ranking up. The important milestones in the points world are all the levels/ranks you hit
- Anything that is not listed in the approved category
- Posting milestones/achievements that are not yours. If a member wants to post that they made an achievement/milestone they will and you can congratulate them there. Some people do not like to post their milestones/achievements or they would like to post them on their own and I think that should be respected

Posting milestones for Ranking up VS Point totals. Some people have mentioned that they prefer to post point total milestones vs posting when they rank up.. To that I would say just pick one or the other. SO either post point totals as a milestone or post when you rank up. The recommended totals for point totals would be every 50,000 points (so post at 50,000, 100,000, 150,000) until you reach level 24 then the level 24 suggestion should be followed.

The purchase of a new GLOCK is always a reason to celebrate. Pleaase do post when you get a new GLOCK.

"The term community has two distinct meanings: 1) Community can refer to a usually small, social unit of any size that shares common values. The term can also refer to the national community or international community, and 2) in biology, a community is a group of interacting living organisms sharing a populated environment.

In human communities, intent, belief, resources, preferences, needs, risks, and a number of other conditions may be present and common, affecting the identity of the participants and their degree of cohesiveness.

Since the advent of the Internet, the concept of community has less geographical limitation, as people can now gather virtually in an online community and share common interests regardless of physical location. Prior to the internet, virtual communities (like social or academic organizations) were far more limited by the constraints of available communication and transportation technologies."

What is an Internet Troll
(From Wikipedia)
A troll is a person who sows discord on the Internet by starting arguments or upsetting people, by posting inflammatory, extraneous, or off-topic messages in an online community (such as a forum, chat room, or blog), either accidentally or with the deliberate intent of provoking readers into an emotional response or of otherwise disrupting normal on-topic discussion. This sense of the word troll and its associated verb trolling are associated with Internet discourse, but have been used more widely. Media attention in recent years has equated trolling with online harassment.

Gaming is the behavior that internet trolls use to maximize the number of points that they can earn by doing things that are not accepted by the community as a whole.  Examples of this behavior include but are not limited to flooding the board with posts that no one cares about, posting things that were just posted again, putting a +1 reply to every comment in a question, posting random letters like "m' on the live feed, etc...  This behavior is frowned upon by Glock.  Proof that this behavior is frowned upon is in the Mendax patch that was awarded by Glock to members for gaming the system.  The Mendax patch comes with a great reward of up to -40,000 points (and yes that is a negative number).